How Much Value Does a Loft Conversion Add to a Property? 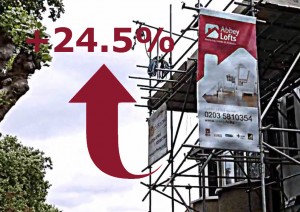 The simple answer is yes, a loft conversion will add value to your property. The average across all the boroughs of London is an increase of:

To provide a true picture of how much money a London loft conversion could add to a property we have completed a study comparing the values of two bedroom and three bedroom London houses using www.rightmove.co.uk (2017 data), with the aim of illustrating the potential value increase of converting the loft of a two bedroom home in order to create a three bedroom home.

Here is what we did:

Of course in monetary terms, the potential increase in value will vary according to the value of the two bedroom property. Using London’s average percentage increase of 24.39% to illustrate the point, a two bedroom house valued at £300,000 has the potential to rise in value to £373,170 if a loft conversion were added to create a third bedroom. Adding a loft conversion to a two bedroom property valued at £500,000 in order to create a third bedroom could increase the property’s value to an impressive £622,000. Now that’s a lot of added money.

Contact
Share this post:
Related articles
The Impact of COVID-19 on the Property Market
“Stay at home.” It’s been the mantra of both lockdowns, and the activity that has defined much of the year,...
Predicting The Property Market In 2020
Second-guessing the property market is always tricky – there are so many variables that aren’t always easy to predict. But...
Weighing Up Brexit’s Impact On The Property Market
Since the referendum vote to leave the EU in 2016, there has been great speculation and concern over how Brexit...
How To Increase The Value Of Your House
Climbing the property ladder and looking for ways to add value to your house before putting it on the market?...
Will a Dormer Conversion Add Value to My Property?
If you are looking to add some extra space to your home, you may have found yourself looking into the...
The Only Way is Up – If You Want to Keep the Value of Your Garden
Short on space indoors but lucky enough to have an area outside which offers the potential to extend? Although the...